Sticky Keys is an accessibility feature within Windows that assists users who have physical disabilities. Instead of having to press multiple keys at once, you can use one key by turning on Sticky Keys and adjusting the settings. However, the feature can be manipulated to elevate your local privileges. Now this technique is not new and has been around since the days of Windows XP but is still relevant if you have physical access to a device.

Sticky Keys (AKA sethc.exe) is invoked when shift is pressed 5 times and if this happens pre-login, it runs as system. If sethc.exe is replaced with a custom binary of the same name, in theory when Sticky Keys is invoked your binary will run as system. In a default state, Windows protects sethc.exe via standard file permissions and simply replacing sethc.exe with a custom binary as a standard user would be too easy!

The good news for an attacker is, if you have physical access to a device with limited configuration hardening and can boot it into either Windows Recovery Environment (WinRE), another operating system or access the operating system disk in an unencrypted format sethc.exe can be replaced.

How to execute the attack

For this demonstration, sethc.exe will be replaced with cmd.exe (Command Prompt) within WinRE against a standard Windows 11 build. The steps covered would be extremely similar for Windows 10 and older versions of Windows. The steps involved are:

The first step is to access the operating system’s disk without the operating system running. To launch WinRE restart Windows with the shift key held down and then choose the following options: Troubleshoot > Advanced options > Command Prompt. If the device is protected by BitLocker, you will need to obtain the recovery key. 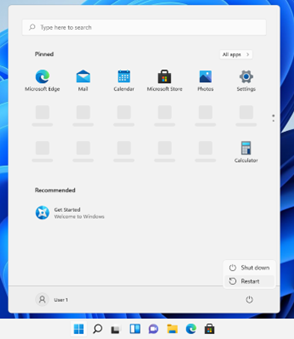 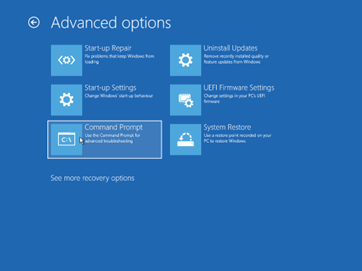 The original sethc.exe binary should be backed up for restoration after the attack. Run the following to copy it to the root of C:\:

With a copy of sethc.exe made, the original can be replaced with cmd.exe or any other binary of your choosing. Run the following to achieve this:

When completed, close WinRE and restart the back into Windows 11. Of course, whilst you have the disk in this state you could consider taking a copy of the SAM and SYSTEM files to obtain the credentials for any existing local administrator accounts.

When Windows has started and you have reached the login screen, press the shift key 5 times. If everything has been copied correctly, sethc.exe will invoke and you will be presented with a Command Prompt which is running as system. 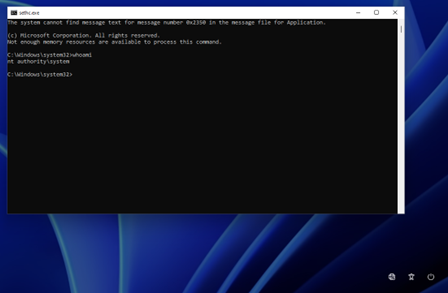 Now at this stage, you have a system level Command Prompt however if you login this will change to the privileges of the user you are authenticated as.

With the Command Prompt, run the following commands to create yourself a dedicated user that has local administrator rights: 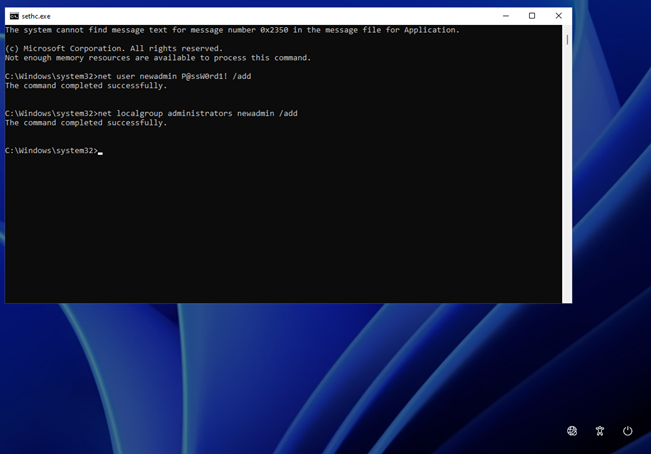 Close command prompt and log in using the new account. At this point, you will have full local administrator access to the device. Don’t forget to move the original sethc.exe in C:\ back to C:\Windows\System32!

This attack has been around for a long time and as demonstrated is still valid on the latest version of Windows 11. It can also be used as a valid route to gain administrator access to a system when locked out. However, there are some controls which can be put in place to mitigate malicious activity and include disk encryption and EDR tooling.

BitLocker's full operating system disk encryption with recovery keys that are only accessible to key personnel or administrators provides the most comprehensive solution. An attacker could have physical access the disk from WinRE or another operating system but they would require the BitLocker recovery key to gain data access. This solution does not require additional software to be installed but does require planning. NCSC’s Device Security Guidance provides details of a recommended BitLocker configuration.

If you have access to EDR tooling such as Microsoft Defender for Endpoint, it is likely to detect Sticky Keys attacks and stop such malicious activity. However, if an attacker has got to the point of replacing sethc.exe it is likely they have modified the disk, potentially disabled other controls, and removed key data assets greatly impacting the integrity of the device.

Brute-force protections – designed to protect against attacks like password guessing – need to be carefully pitched and have associated pros and cons. Many popular protections these days rely upon monitoring and blocking malicious activity based on source IP address. In this blog post, we explore using IPv6 temporary addressing to bypass IP based brute-force protection.

Defining controls by expectation may result in exploitation

One of the significant factors influencing SMEs when selecting security controls is not pragmatic risk management and risk treatment, or even common industry frameworks, as you might imagine - but security controls expected by customers. Supply-chain security management through due diligence activities is often reasonable for this approach, but the one-size-fits-all approach can lead to weaker security models.

Dead canaries in your network

When an adversary is inside your network, the faster you can detect and remove the intrusion the better.  Even if you don't have a "network" per se – even if you are running a pure zero-trust environment – detecting an attacker at work early will give you the upper hand. Even with sophisticated EDR products in the mix, criminals can often introduce malware to an environment to gain a foothold in a way that isn't detected.  Introduction of malware and establishment of a foothold is critical to criminal operations and so today's criminal gangs spend a great deal of time and resources using tradecraft and techniques to bypass the detective and preventative controls running on user workstations.  Even with a really good set of tools in the hands of an experienced defence teams, there is a good chance of criminals starting their attack chain without being caught. Using canaries can help you stay ahead.